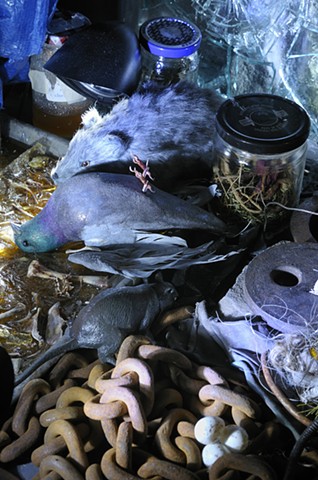 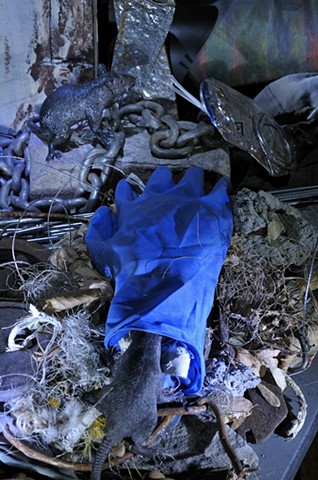 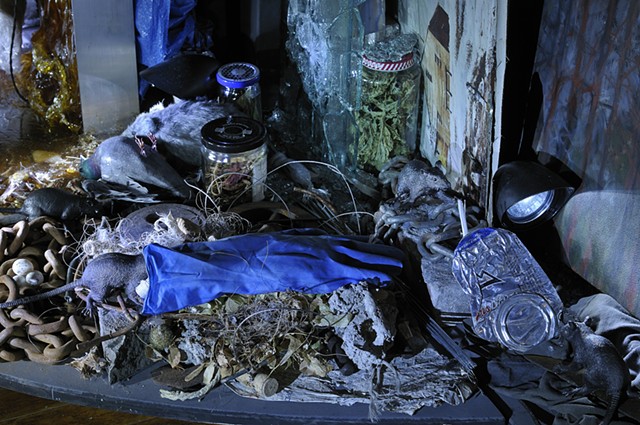 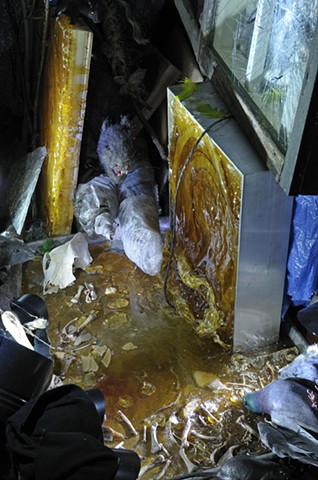 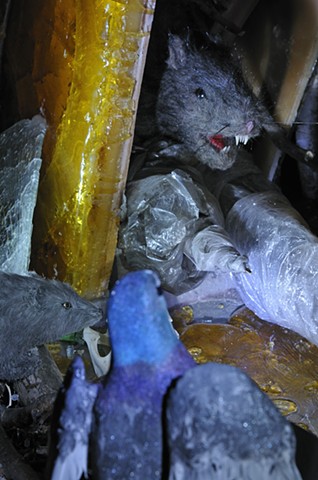 Deluge_Rats in the Art Storage Racks 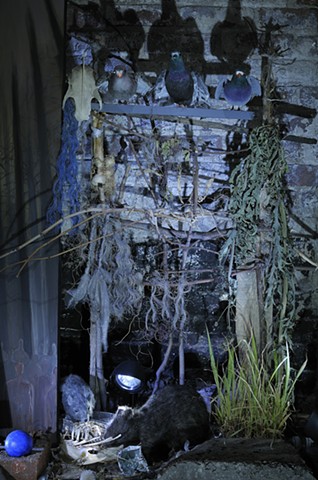 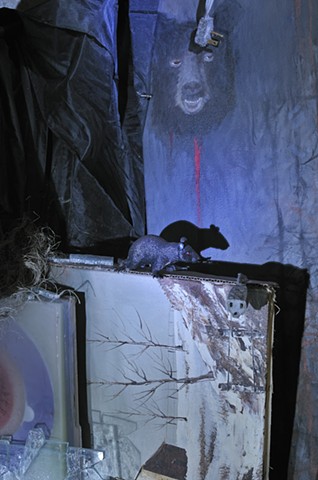 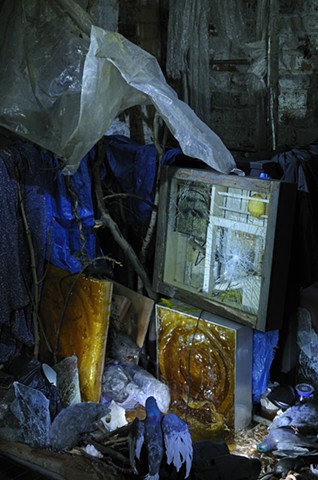 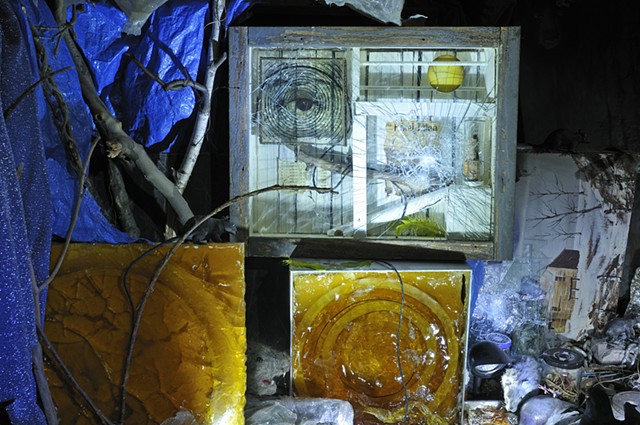 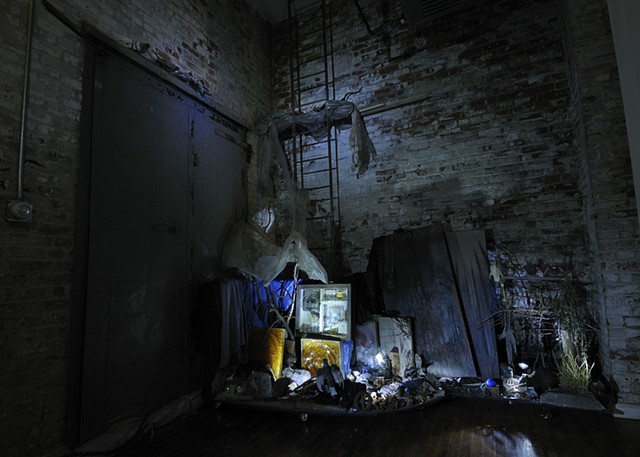 DELUGE, A Collaborative Installation at NURTUREart Gallery By Joyce Yamada and Joanne Ungar

Deluge began in response to a call for submissions that asked the artists to apply environmental principles to gallery operations. It evolved into a dystopian vision of the life of a Brooklyn artist once the polar ice caps have melted and half of Brooklyn is under water. The main installation is in the hallway directly across from the gallery door, and measures 9 feet wide ,8½ feet tall, 4 feet deep. A secondary installation is a large collage hung on the hallway wall leading to the main installation; it is a solo piece by Joyce Yamada, and measures 10 feet wide by 14 feet tall.

The installation posits an analysis of the human relationship to nature that places a romanticized vision of nature at fault for a significant amount of human-caused destruction of the environment. For instance the desire to live amidst beautiful scenery leads to subdivisions in the forest and disruption of local ecologies. Worse, a failure to seek knowledge of the natural world's true functioning leads to fantasy, a failure to understand evolution or the geologic past, and an overblown sense of human entitlement. Nature is neither benign nor stable, and we ignore its true functioning at our peril.

The heart of the installation is a reference to Joseph Cornell's Hotel Eden. In its 21st century permutation, the glass front of the hermetic box has shattered. The bird, transmuted from an exotic pet parrot to the ultimate urban survivor, the pigeon, has disappeared. The homeless Brooklyn artist has tried to salvage as much art work as possible, is growing and drying food, making and salvaging art materials, but in general is over-run with vermin and struggling for survival.

Deluge is based in part on contemporary climate science. A startling recent finding from study of ice cores is that the past 10,000 years which has seen the rise of agriculture and human civilization after millennia of human existence as scrounging hunter-gatherers, has been a time of very anomalously stable climate. In the past, average temperature has jumped by as much as 20 degrees in a decade—the resulting disasters are beyond imagining. The human species is unlikely to terminate itself in the near future, but our culture? It's hard to say. The faux Cornell box is beautiful and fragile.

We started by making the Cornell box, which has been the focal point of the piece from the beginning. The work’s final imagery evolved in tandem with the discovery of attractive, weird, or evocative detritus. For example, the dripping amber piece is one of Joanne's projects that never cured properly. This piece oozes and led to the idea of the toxic amber pool, our version of the La Brea tar pits, hence the ensnared pigeon, the lurking rat, and the amberized bones. The painting with a severed bear head is an unresolved painting of Joyce’s that references Caravaggio's late painting, "David and Goliath", and is a Caravaggio self-portrait morphed into a bear's head; it suggested many of the funnier details, such as rats casting shadows on the painting, and gnawing on trashed extension cords, as well as suggesting the dark, grey palette. The beautiful shattered glass of the Cornell box led us to use numerous other glass shards and shatters. A discarded blue latex glove turned into a rat's nest. A blue ball got impaled by a found fork. The piece evolved very organically, and as it became resolved, we wired, bolted and glued most objects into position, because the entire structure is mobile – the whole thing rolls into the gallery every night when it closes.

The faux vermin were purchased via internet and customized, and the lights are solar-powered. The other materials are mostly salvaged from the streets, our studios, and our homes.