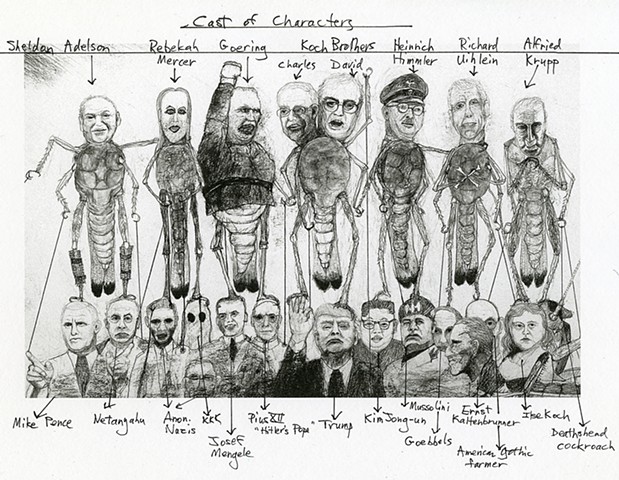 Locust Puppeteers_Cast of Characters
< previous next >

LOCUST PUPPETEERS A Theatrical Drawing The Cast of Characters

Hermann Goering: Most powerful Nazi after Hitler, instrumental in the Rape of Europa, notorious art thief and war criminal.

The Koch Brothers: May not like Trump much but their business includes among many other things: Asphalt, chemicals, fertilizers, minerals, natural gas, plastics, petroleum, pulp and paper. Mega political donors funding Americans For (their own) Prosperity (AFP) (italics my addition). Opposed to global warming regulation, affordable health care, cap and trade, collective bargaining, you name it. Powerful behind the scenes puppeteers, operating behind the screen of the not-for-profit status of AFP.

Richard Uihlein: Founder of the Uline business. Megadonor to the right wing.